I find myself missing that Beats Music more than I’d expected. I liked the look and feel of it. Most everything I searched for was there (with the exception of streaming holdouts like The Beatles). I had a sentimental attachment to Beats after all the work I’d personally done for them.

Because I relied so heavily on Beats Music, I find myself somewhat out of the loop when it comes to other services. As a way to find my new favorite, and educate myself about what’s out there, for the past few months I’ve been checking out other “on-demand” music services.

Initial Impressions: Ugh. I don’t understand why I have to download iTunes. A streaming service should require an app download on a mobile device, but it shouldn’t require a desktop download. It’s an outdated approach, and a barrier to entry. Why should I have to download a desktop client in order to get quick access to on-demand music?

From there, I found the Apple Music portion surprisingly difficult to find. It seems like an odd branding decision to keep iTunes and Apple Music somewhat separate, but one has to be accessed through the other. To find Apple Music, I had to click the “For You” tab on iTunes.

Beyond the initial hurdles, setup was relatively straightforward. Weirdly enough, it probably helps in my case that I haven’t been using a lot of Apple products lately. I have an old iPod, but I’ve never had an iPhone or iPad. My desktop computer doesn’t have a lot of music on it. Most of the issues I’ve heard about setting up a new Apple Music account have to do with the match feature, which didn’t apply to me. I wasn’t able to move my (small) music library from Beats to Apple, but that probably had more to do with me using a different last name and email address than anything else.

Search function: One of the things I miss about Beats is that an artist’s page would list albums that were deemed “essentials”, as well as “latest releases”. I think Apple’s search results are a little jumbled, and their search might not be as powerful. For example, while searching for Anthony de Mare’s Liaisons — Re-imagining Sondheim From The Piano, I see the artist Anthony de Mare show up, but I don’t see the album, and I can’t seem to find it while clicking through Anthony de Mare’s page. What makes it weirder is that the album art has been selected for the artist’s art, so it’s probably intended to be available for streaming, but I can’t find it.

Recommendations: Perhaps what interests me most about each service is their ability to recommend music to me. Apple has learned a little more about my tastes since I set it up, but it’s still a little off. My first recommendations were an intro to Spoon playlist (no) and an Alt-Country playlist (after I’d let them know I hate country). Radiohead, Kanye West, and Wilco are a little more attuned to my preferences, but that’s because I selected them from the bubbles when I signed up.

Aesthetics: Apple is nothing if not sleek. The artist’s image is nicely integrated, and all the info I’d want at a glance is there. However, the UX isn’t perfect: I don’t love the way the search results look, especially since it seems to take a while to load. I’m also annoyed by the way the current song is displayed: it shows or scrolls across the top of the window, separated from all the other pertinent info, in a too-small font. 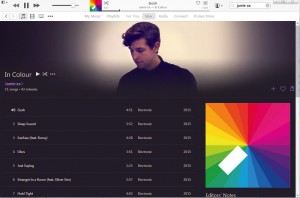 Playlists: I think Apple brought a lot of the Beats playlists over with them, including the wide array of curators (Downbeat, Pitchfork, etc.; they seem to have lost Naxos, whose witty playlists I miss). I like the “Intro” playlists, and there seems to be a fair amount of activity-based playlists. I spend more time listening to curated playlists than anything else, so the only improvement would be an even greater number of them, and I wish the playlists recommended to me were changed up on a more frequent basis. The other downside is the roundabout access to Playlists. I’m not sure whether this is the best way, but I’ve been accessing them via the “All Genres” pull-down menu on the “New” tab.

Mobile app: I tend to do most of my listening via desktop, so while I’ve heard negative experiences of the Android app, I haven’t encountered many issues during my limited usage of it. However: it’s frustrating that there isn’t an Apple Music app for my Android tablet (running Marshmallow), but there is one for my phone (same OS). Maybe that’s Google’s fault, not Apple’s. The other main issue I have is that it doesn’t have Chromecast support, so I can’t cast it to my TV at home. When it comes to playing music at home, we usually opt for Spotify for that reason.

Summary: Apple’s vast music library and lovingly-curated playlists shine. The UX is decent, but reliance on iTunes is a deal-breaker for me. The lack of an Android tablet app and Chromecast make it even more of a chore to use. I’m looking forward to checking out other services, and will only return to Apple if I find other services’ playlists lacking.

“When Amazon Dies“, a recent piece in The Atlantic, is an interesting look at one of the biggest hurdles for converting “a la carte” (or “cloud”) service users to subscription streaming services:  Users want to keep the content they’ve purchased. But when a service goes away or an account is deactivated, any content that was saved “in the cloud” disappears too.

Other than books (which I read on my Kindle), I generally prefer subscription services to a la carte and download models for two reasons:

1.) Unlike a download or a la carte streaming service, paying a subscription rate allows you unlimited access to the service’s catalog. I currently have a Beats subscription, which has just about every album/artist/track I can think of. When that service goes away, I’ll be sad, but then I’ll subscribe to another service where I’ll have access to a catalog that is – to me, anyway – functionally the same. I won’t feel like my subscription was a sunk cost, because I’m paying for continued access to a broad catalog, rather than buying access to specific albums which may or may not remain available to me later.

2.) If you’re using an a la carte streaming service, there’s no guarantee your music will always be available to you. In fact, it’s not really “yours”. Depending on the service, Digital Rights Management (DRM) may be in effect. DRM can limit the number of devices to which you copy your music, and any retroactive changes in territory restrictions can mean content gets pulled from your cloud streaming library after a “takedown” is issued. Personally, I’d rather pay for a subscription service. If an album I want to listen to gets taken down, at least I didn’t pay for just that album.

The downside to switching services, however, is the thought of losing playlists. This one isn’t a big deal to me either, actually. I tend to listen to music while I’m working, so I’m a big fan of playlists that are “curated” by someone else, rather than ones I create. It’s nice to hear a variety music I enjoy without having to invest time into setting up the playlist. I may be an outlier – I know a lot of people enjoy crafting the perfect playlists for partying, studying, cleaning, etc.

I think the connection to our playlists goes deeper, though, than the time and thought we’ve put into them. To a large extent, the music we choose is part of our identities, especially when we share our tastes with others. Most people remember the first physical album/tape/CD they purchased. Everyone loves to play DJ at parties. Vinyl collecting has been enjoying a resurgence for years, partly because records can be arrayed on shelves in the living room for everyone to admire. When we lose that ability to curate and show off music, we lose part of that connection. Music becomes fully intangible.

So how do we incorporate an interest in media ownership into an increasingly digital world? Possibly a playlist-porting service like Soundiiz has potential, but I’d like it better if it was fully independent from any existing service – i.e., if it wasn’t owned by a streaming service.

Perhaps sharing what we’re listening to on social networks is the way of the future, but that’s exactly what put me off Spotify in the past. From what I remember, in Spotify’s early days, an account had to be linked with a social media account, and by default it would update your Facebook page with the music you’d been listening to. Beyond the added clutter, I never liked that feature because there was a whiff of trying-too-hard. It’s “cool” for people to accidentally notice you’re listening to Morton Feldman at work, or to casually mention you’re listening to the perennially-hip Miles Davis while cooking, or to namedrop on a blog. But when you’re developing the “perfect” playlist to push to the news feeds of all your friends, it’s just not interesting anymore. Plus, there’s always the chance of accidentally admitting Mariah Carey is sometimes your jam.

What’s the answer, then, to our ownership dilemma? I think it’s some combination of playlist portability and social media sharing, or possibly just one or the other, but with better execution than previous attempts. I think time will tell.

Here are a few good articles from last week:

The New Yorker: What Kind of Genius Is Max Martin?

I had a passing familiarity with Max Martin’s influence, but John Seabrook’s bio piece is well worth a read. Martin’s songwriting forTaylor Swift adds a layer of complexity to the discussion about Swift, Ryan Adams, and gender bias in music reviews.

Grantland: How Radiohead’s ‘Kid A’ Kicked Off the Streaming Revolution

Steven Hyden’s piece on Radiohead’s Kid A as a milestone in album-length streaming is interesting, though it doesn’t match my own experience of streaming music’s history. Despite Hyden’s assertion that Kid A blazed a trail of leaked albums, it wasn’t hard in 2000 to find streaming music online. I don’t know if Hyden is being revisionist here, or if he simply means this was one of the first albums (if not the first) to be leaked by a record label itself, but leaks were common all through the ’90s (Stephen Witt’s book shares a fascinating history of music availability online – a history that meshes better with my own memory of the ’90s).

Radiohead did shift the paradigm with a later album, In Rainbows, which was released online as pay-what-you-want after their dispute with EMI.